The Story of Henry Bishop 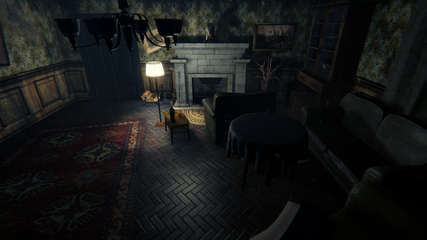 My name is Henry Bishop, I will tell you my horrible story...

This story happened to me in the late 70s and even the most terrible nightmare will seem only echoes of horror in comparison with those mysterious events which I participated in. I worked as a real estate agent, and we had an old mansion in Maine which no one could sell. It was as a dead weight on our company. As a stale product on a store shelf which was losing its value every day. After all, houses also have a shelf life. And then, one May morning the silence of our office on the Fifth Avenue was broken by a telephone call. That call changed my whole life. It was a Mr Johnson, a very strange client who was willing to seize this old junk called house. And even the fact that a family of five people disappeared in this house did not frighten him, but on the contrary it was the reason for such a strange purchase. After a brief conversation my boss decided to send me to Stonebridge, to this provincial hole in Maine. My task was to inspect the house and make sure that it still didn't fall apart, and then to contact the clients for a deal.

You will find yourself in the shoes of the main character, explore the old mansion and learn the horrible secret of the family, which once disappeared without a trace in this house. The world around the player will change, the danger may be waiting for you at every turn. Now instead of people this place is inhabited by dangerous creatures who will try to kill you.
The player will face a lot of riddles, quests and will have to use various objects.
During the game, the player will have to defend himself from monsters with the help of cold and fire-arms,
and sometimes to flee or hide.
An unusual mystical plot will tell you a terrible story and make you a participant of mysterious events.
Mystical thriller with a confusing plot.
Atmospheric environment and nice graphics.
Several types of weapons and the ability to confront enemies.
Various riddles and puzzles.
Several scenarios


Based on The_Story_of_Henry_Bishop-HOODLUM ISO release: hlm-thestoryofhenrybishop.iso (6,923,517,952 bytes)
100% Lossless & MD5 Perfect: all files are identical to originals after installation
NOTHING ripped, NOTHING re-encoded
Significantly smaller archive size (compressed from 6.4 to 3.4 GB)
Installation takes 2-6 minutes (depending on your system)
After-install integrity check so you could make sure that everything installed properly
HDD space after installation: 11 GB
Language can be changed in game settings
At least 2 GB of free RAM (inc. virtual) required for installing this repack
Repack by FitGirl