Review:
British quartet Suggested Friends play a winsome strain of gently fuzzed, ’90s-inspired indie pop, replete with warm harmonies and some surprisingly nimble guitar interplay. Comprised of singer/ guitarist Faith Taylor, lead guitarist Jack McGinn, bassist Emma Kupa, and drummer Christabel Williams, the London-based group is firmly rooted in both queer identity and the D.I.Y. punk scene from which they sprung. In the two years since releasing their scrappy, self-titled debut, the four Friends have done plenty of U.K. touring, made their first trip to the U.S., and considerably sharpened their craft. Less ragged and lo-fi than their debut, the band’s sophomore set, Turtle Taxi, shows growth on multiple fronts, from studio craft to musicianship and arrangements. That’s not to say their music is not without teeth, but the overall softening and layering of the band’s sound here better fits the tender tone of Taylor’s voice and songwriting. Standouts like “Cygnets” and the title track are rife with sweet vocal harmonies, a sharp melodic sense, and thoughtful guitar work that veers from subtle dreampop voicings to chugging classic rock riffs and guitarmony breakdowns. More understated songs like “Blooms” and “At Ease” reveal a deeper stylistic and emotional range, while the impassioned “Pretty Soon Your Grave Will Be a Landfill” takes aim at political turbulence with both poignance and anger. Recorded in rural Norfolk, Turtle Taxi manages to capture Suggested Friends’ inherent spontaneity and camaraderie while augmenting their music with some understated pop production. Bits of hand percussion, piano, synths, and even horns are tucked tastefully into the mix, especially on “The Apocalypse (It’s Just a Day Away),” another highlight. The band’s mix of introspection and weary tenderness is cut with just enough playfulness to tone down their overly earnest nature, making for an appealing pop record. 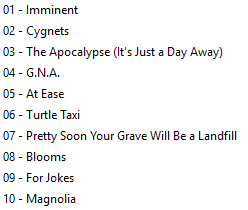