ATTENTION! The minimum size of the repack is 26.2 GB, read repack features section for details. 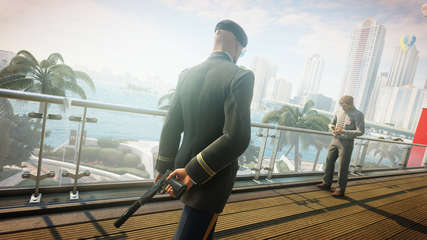 Travel the globe and track your targets across exotic sandbox locations in HITMAN™ 2. From sun-drenched streets to dark and dangerous rainforests, nowhere is safe from the world's most creative assassin, Agent 47.

Prepare to experience the ultimate spy thriller story; your mission is to eliminate the elusive Shadow Client and unravel his militia, but when 47 learns his target's true identity and the truth about his past, it changes everything.

Based on Hitman.2-CPY ISO release: cpy-hit2.iso (111,169,634,304 bytes)
Hitman.2.Update.v2.40.0.incl.DLC-PLAZA (18.1 GB) and Hitman.2.Update.v2.70.1.incl.DLC-PLAZA (15.2 GB) updates applied over
Game version is v2.70.1, all released DLCs are included and activated
100% Lossless & MD5 Perfect: all files are identical to originals after installation
NOTHING ripped, NOTHING re-encoded
Selective Download feature: you can skip downloading and installing of Legacy Pack DLC (contains missions from Hitman 1 and Patient Zero campaign)
Significantly smaller archive size (compressed from cumulative 136.8 to 26.2/36.4 GB)
Installation takes (for main game): ~1 hour 20 minutes on 8-threads CPU on SSD; ~2 hours 20 minutes on 4-threads CPU on HDD; Installing with Legacy Pack will be ~50% longer
After-install integrity check so you could make sure that everything installed properly
HDD space after installation: up to 149 GB (up to 159 GB during installation)
Language can be changed in game settings
At least 2 GB of free RAM (inc. virtual) required for installing this repack
Repack by FitGirl

This repack IS NOT backwards compatible with previous repacks of this game.