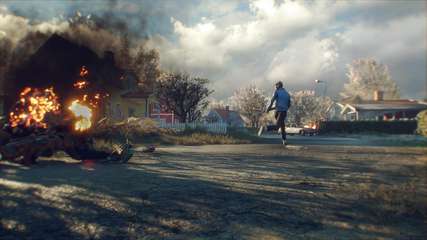 Welcome to 1980’s Sweden. The local population has gone missing, and machines of unknown origin roam the streets. Explore this vast open world to unravel the mystery of the invaders, perfect your fighting strategies and prepare to strike back. In Generation Zero, living is winning.

Survive in a Hostile Open World: Take on missions and challenges throughout the open world to unravel more of the mystery, while scavenging for weapons and supplies to help you stay alive

Get Ready. Then Fight Back: Tactically combine weapons, skills and equipment, to lure, cripple, and destroy your enemies.

1-4 Player Seamless Multiplayer: Play alone, or team-up with up to three friends as you collaborate and combine your unique skills to take down enemies.

Stealth and Strategy. Co-Operate to Live: Some enemies are too powerful to attack head-on, which is when you should adopt stealth tactics by moving silently, exploiting the enemy’s senses and using the environment to your advantage.

1980’s Nostalgia: Among the loot, you will find outfits and hairstyles to recreate your favorite 1980s style to take on the machines in style.


Based on Generation.Zero.Anniversary-CODEX ISO release: codex-generation.zero.anniversary.iso (32,140,460,032 bytes)
8 DLCs are included and activated; game version is v1814208
Two multiplayer cracks are available in NoDVD folder after installation (thanks to deadmau5, Tuxedo Mask and valtrix1982)
100% Lossless & MD5 Perfect: all files are identical to originals after installation
NOTHING ripped, NOTHING re-encoded
Significantly smaller archive size (compressed from 29.9 to 9.1 GB)
Installation takes 8-20 minutes (depending on your system)
After-install integrity check so you could make sure that everything installed properly
HDD space after installation: 40 GB (up to 46 GB during installation)
Use "Language Selector.exe" in game root to change the game language
Repack uses XTool library by Razor12911
At least 2 GB of free RAM (inc. virtual) required for installing this repack
If you can't move your mouse cursor in the main menu, press Alt+Tab two times to switch from the game window and back
Repack by FitGirl

This repack is NOT backwards compatible with my previous GZ repack.

t a t u all about us