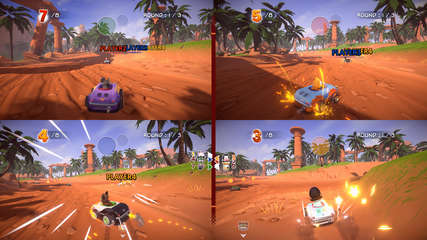 Garfield, the famous lasagna-loving cat is back to take on Jon, Odie and company in a no-holds-barred racing game!

Choose your character and kart according to their characteristics and your driving style, get off the starting line first and control skids to outrun your opponents. Use crazy bonus objects, like the Pillow or the Magic Wand, to gain an edge and get over the finishing line first. Are you lazy like Garfield? Take shortcuts to overtake the other racers with the Spring!

Race your friends in local mode or online, with up to eight players on 16 iconic circuits from the world of Garfield.

Based on Garfield.Kart.Furious.Racing-CODEX ISO release: codex-garfield.kart.furious.racing.iso (3,445,522,432 bytes)
100% Lossless & MD5 Perfect: all files are identical to originals after installation
NOTHING ripped, NOTHING re-encoded
Significantly smaller archive size (compressed from 3.2 to 1.4 GB)
Installation takes 2-5 minutes (depending on your system)
After-install integrity check so you could make sure that everything installed properly
HDD space after installation: 5 GB
Language can be changed in game settings
Repack uses XTool library by Razor12911
At least 2 GB of free RAM (inc. virtual) required for installing this repack
Repack by FitGirl

they walk among us