ATTENTION! The minimum size of the repack is 21 GB, read repack features section for details. 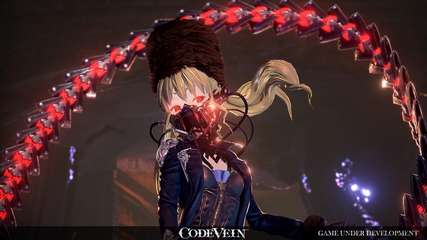 RISE TOGETHER
Team up with an AI partner or a friend in co-op multiplayer and venture out into a world of destruction in this story driven connected dungeon experience. Use your combined strength to coordinate your approach and defend each other from surprise attacks or tackle overpowered enemies.

GREATER CHALLENGES BRING GREATER REWARDS
Acquire new gear, level up your character, and become more powerful to rise up against the Lost. From new players to seasoned action game veterans, the challenges in CODE VEIN will keep you coming back for more.

CUSTOMIZE YOUR REVENANT
Choose from various weapons such as bayonets, axes, spears, and more. Enhance your character’s abilities with powerful Blood Code enhancements, each with access to various “Gifts” that can increase your strength, weaken enemies, and can allow you to utilize new weapon abilities or access overpowered attacks. Finish off your opponents with your Blood Veil, powerful blood draining tools, each with their own unique visual and attack style that opens up a myriad of new combat strategies.


Based on CODE.VEIN-CODEX ISO release: codex-code.vein.iso (32,999,964,672 bytes)
4 DLCs are included and activated
Steamworks Fix, allowing multiplayer via Steam with the same crack owners, is available in NoDVD folder after installation - thanks to deadmau5 and BzinhoGames!
100% Lossless & MD5 Perfect: all files are identical to originals after installation
NOTHING ripped, NOTHING re-encoded
Selective Download feature - you may skip downloading and installing of credits video
Significantly smaller archive size (compressed from 30.7 to 21/22 GB, depending on selected components)
Installation takes 20-35 minutes (depending on your system and selected components)
After-install integrity check so you could make sure that everything installed properly
HDD space after installation: up to 31 GB
Use corresponding BAT-files in the game root to run the game in the language you want
Voiceovers language can be changed in game settings
Repack uses XTool library by Razor12911
At least 2 GB of free RAM (inc. virtual) required for installing this repack
Repack by FitGirl